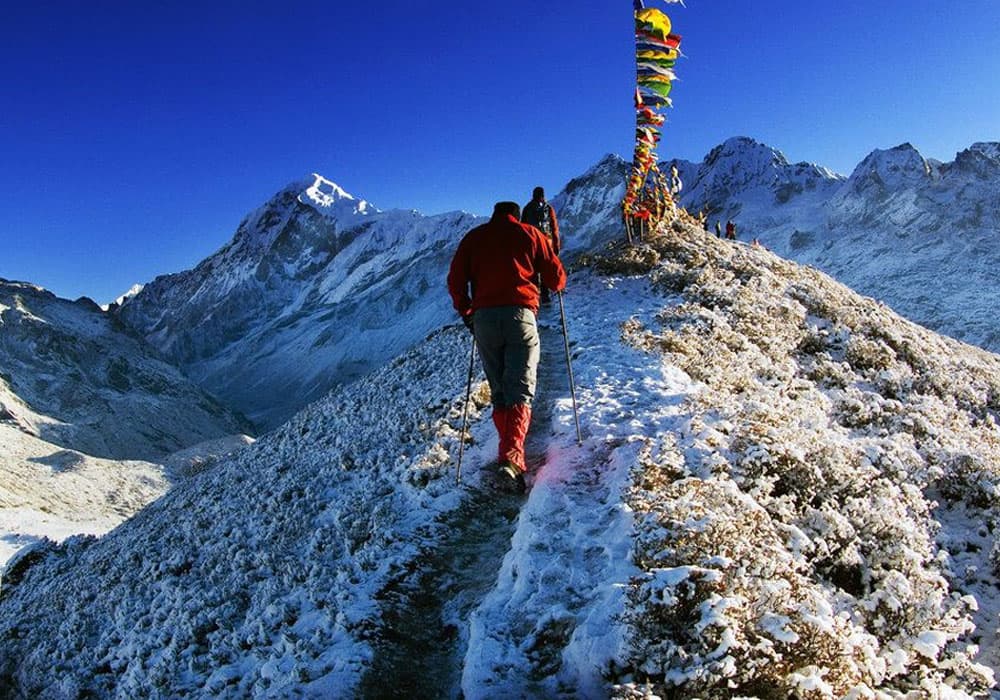 Be a part of a thrilling and unmatched experience in Sikkim with Winter Dzongri...Read More

Trek expeditions in Sikkim hold a host of interesting exposure in the great Himalayan outdoors. From enjoying warm hospitality at the simple homes of the Tibetan Buddhist and Sikkimese people to whitewater rafting, birds and butterfly watching in the abundant greenery of Sikkim, it’s a world of happiness out there for the soul! While well acclaimed high altitude treks like Goecha La can test your stamina to the fullest and demand a number of days on the move, the 5-day long Dzongri trek presents a shorter yet rich itinerary. You get to feast your eyes on snow peaks soaring into the blue skies, unveiling beyond whispering woods of pines as you journey ahead, beautiful wilderness of rhododendrons and oaks in the Kanchenjunga National Park, and enchanting hamlets along the slopes complete with monasteries and prayer flags adorned in hanging bridges swinging in the high wind between mountains. Brace yourself for magnetizing views of the mighty Kanchenjunga at 8585 m, along with Mt Pandim at 6691 m, Mt. Kabur at 7338 m, Rathong at 6679 m, Mt Kokthang at 6147 m, and the Goecha La summit at 5127 m. Choosing this amazing trek in West Sikkim also gives you a chance to explore Yuksom - the base camp to the Dzongri Trek. A historical town in the Himalayas, Yuksom was the bastion of Chogyal kings of Sikkim.

What is Dzongri Trek?

A trail winding through the core area of the Kanchenjunga National Park in West Sikkim, the Dzongri trek itinerary is more than a shorter alternative to the Goecha La trek. Starting from Yuksom - Sikkim’s repository of the region’s Chogyal legacy, moving through forests of conifers, and unveiling an amphitheater of glorious snow peaks as we go, the Dzongri route is the very definition of thrill. Wake up to magnificent sunrises over the majestic Kanchenjunga, get lucky spotting red panda and endemic Himalayan avifauna, feel the moderately difficult gradients bring out the best of your physical potential, and revel in the peak views from the Dzongri top. Come in the early winter to find the forests sprinkled with new snow, and onto the meadows covered in sparse alpine scrub and grass vegetation surviving in the frosty chill of late November all the way through till March. Ecology and environmentalism enthusiasts will find it of interest on the Dzongri trek to pass through changing vegetation and topography, from mixed coniferous to sub-alpine, and moist temperate forests. The duration of April and May in Dzongri is especially celebrated for the rhododendron blooming. Turn your color filters off and capture the pure riot of red and pink rhododendrons hues setting the forest as if aflame!

Why Should We Go for the Dzongri Trek?

How High Is the Dzongri Trek?

The highest point on the Dzongri trek is at the Dzongri top view point, reaching to 4250 m, while the trek flags off from Yuksom situated at 1785 m.

The springtime in the eastern Himalayas during April to May is ripe time to visit the Dzongri trail. Winter snow enthusiasts may consider a visit during December to March, though the temperatures are predicted to drop very low.

By Air: Bagdogra near Siliguri has the closest airport to this trek. You can find shared cab to Yuksom from Siliguri.
By Rail: Siliguri railway station, sufficiently connected to major cities and town in India is the closest railhead. Cabs on share and rent are available from the town till Yuksom.
By Road: Buses run by Sikkim Nationalized Transport connects Yuksom with Siliguri, Gangtok, and Chungthang.

Are There Any Shops Available On the Dzongri Trek?
Trekkers are advised to conclude all necessary purchases by reaching Yuksom. At the village Tshoka, you can find stores selling utilities and local handicrafts.

What to Pack for the Dzongri Trek?

The possibility of Altitude Sickness is not out of question on this trek. Keen attention to fitness and precautionary measures like taking a course of Diamox on medical advice is recommended.

How Busy Is the Dzongri Trek?

The trek is less busy than the more well known Goecha La route, however you are likely to find many trekking on the Dzongri trail during summers.