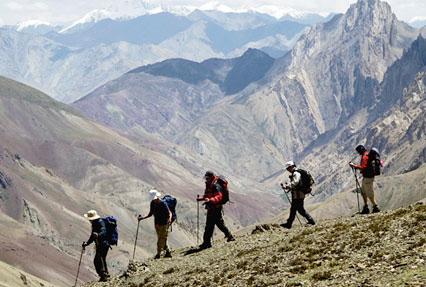 It is environed by snow-capped peaks touching the sky with glory. It is...Read More

Be a part of vivid experiences and capture the stunning beauty of Leh and...Read More

Tourism in Ladakh-- the sunbaked arid cold deserts of the state of Jammu & Kashmir is still emerging. Most of the treks conducted here are lesser-known, unspoiled of commercial trekking, and guarantees an authentic local experience in every sense. Such a trek is Markha Valley, one on which you can walk on for hours not having to come across a soul apart from the native Tibetan shepherds. Here yaks graze on smooth green mountainous veldts, located at an altitude of 5,000 m, white snow ensconced peaks higher than 6,000 m encircle the valley, and an idyllic community of Tibetan people inhabits the region. The valley spreads alongside the Markha River, a tributary of the Zanskar. One can find a number of small villages, mud-brick houses, and Buddhist gompas in the settlements along the river. Isolated since a century from modern advancements, the region retains its ancient cultural traits. These settlements remained out of the modern explorer’s navigation until discovered recently in the 19th century. If you are looking for a destination off the beaten tracks, amidst the desert wilderness and quiet aura of Ladakh, this might be the trek just right for you.

Depending on where you flag off the trek from, whether Spitok or Chilling, the hike could take a minimum of 4 and a maximum of 9 days. Starting off from Spitok, the trek covers rocky stretches until coming upon Ganda La pass at 4,970 m. The trail descends from here, navigating the journey along the banks of the beautiful Marha River. The second starting point for the trek-- Chilling is a location on the Markha River itself. The itinerary spans 4-6 days from Chiling, evidently a much shorter variable. A lot of trekking enthusiasts visiting Ladakh looks to make the trek on their own, which has become an easy option with Tibetan villages coming every 2-4 hours on the trek. However, it’s a safer and much more enjoyable option to trek this route under guidance.

What is Markha Valley Trek?

A stunning cold desert trek in the rain-shadow region of Ladakh’s rugged mountains, the Markha Valley itinerary has just started gaining recognition on the tourism radar. Chilling-the more convenient of the two starting points chosen for the trek is located around 65 km off Leh city, and its concluding point at Shang Sumdo. Over the maximum duration of 9 days, this moderately difficult trek is only challenging on Day 1, on the first 5 km of the sharp climb to the valley. From the second day on, the trek continues on the level ground across Markha Valley. Trekkers can have a taste of the locally cooked meals in the villages on the way, the biggest one being Skyu. The shimmering Markha River winds through and through, painting the valley fertile and green. The exquisite drama of this region lies in the contrast of the green plains and the silken willows against the red and ochre mountainscape. The headquarters of the Markha Valley region is the settlement of Markha, home to a couple of Buddhist gompas and about a handful of twenty households. Further on, the trek takes us to Thachuntse, the wilderness of which is home to Himalayan deer and a vantage point for spotting the 6,150 m high Kang Yaze peak. The most awe-inspiring of stopover points on the trek is perhaps Thachungste, a campsite located at above 4,300 m, just by a sprightly river!

Why Should You Go for the Markha Valley Trek?

How High Is the Markha Valley Trek?

The highest point on the trek is reached upon reaching Gongmaru La, near the end of the trek at 5,200 m.

June to September is considered the best window for enjoying the Markha Valley trek when the temperatures remain pleasurably temperate.

This trek is best accessed through Leh. One could book a flight to Kushok Bakula Airport, Leh, or take the road to Leh by bus via Manali or Srinagar.
Are There Any Shops Available?
l All essential purchases should be concluded by reaching Leh, beyond which convenient stores are hard to spot.

What to Pack for Markha Valley Trek?

Is There Any Possibility of Altitude Sickness?
Altitude sickness remains a possibility in these cold deserts, for which sufficient measures should be taken on medical advice.

How Busy Is the Markha Valley Trek?

The Markha Valley trek is a lesser known gem in the Ladakh Himalayas on which you can enjoy solitude and life in the pristine mountainside.